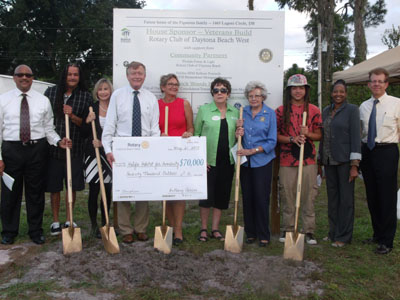 Halifax Habitat for Humanity relies primarily on a great number of community partners to donate funds for home builds. Donations come from many sources including individuals, churches, civic groups, and local businesses.

This past year, members of the Rotary Club of Daytona Beach West have worked long and hard to raise a total of $80,000 to help launch a Veterans Build – where Habitat will build a house with a U.S. Military Veteran. Florida Power and Light and a second Rotary club, Daytona Beach Rotary, have joined as community partners to support the build.

What is Veterans Build?

A Veterans Build is Habitat for Humanity’s national initiative to provide housing solutions and volunteer and employment opportunities to U.S. veterans, military service members and their families.

On October 19th, nearly 70 people came out to support the groundbreaking and celebrate the new partnership.

The event was captured in pictures:

Volunteers, Community Supporters, and Advocates rally around a local veteran and his family at the Veterans Build groundbreaking.

It’s all interconnected – Rotary Club of Daytona Beach West and community partners help with future home of veteran and family.

Join in on the build!

Want to join us as we build this home? Halifax Habitat for Humanity will be posting its schedule of upcoming work days for any volunteers who wish to participate in the home build. For more information contact Andy Thompson at andy@halifaxhabitat.org or 386-257-9950.

Habitat Classes Give Homeowners A Strong Foundation
Scroll to top